Over the past 50 years, ashwagandha has gone from relative obscurity to become a popular supplement in the West. But in its native habitat (India, Pakistan, and Sri Lanka), it has been used extensively for at least 3,000 years.

Ashwagandha means “smell of a horse” in Sanskrit. The name refers not only to the scent of the plant, but to the horse-like strength and stamina it gives those who take it. In traditional Aryurvedic medicine, it is what’s known as a rasayana herb, or what today we call an adaptagen—an herb used to promote general strength and wellness.

Adaptagens are so-named because they help the body better adapt to stress. These herbs are often prescribed to people who are weak and rundown, but they also benefit otherwise healthy people who are looking for a little extra energy.

Because it has characteristics similar to the gold standard adaptagen, Panax ginseng, ashwagandha is sometimes called “Indian ginseng.” It may not be as potent as ginseng, but ashwagandha is a much more affordable adaptagen, usually selling for between $12 and $15 a pound. Compare to ginseng, which sells for over $100 a pound.

Herb of the Mind

Ginseng is an adaptagen with a stimulating character. In the case of ashwaganda, the effect is more calming, so it is often recommended to people suffering from anxiety and insomnia.

Taken regularly, ashwagandha helps promote calm, clear thinking. It has been found to regulate neurotransmitters in the brain such as serotonin, dopamine, and GABA, and reduce the stress hormone, cortisol. There is evidence that it may be helpful in opioid withdrawal and for reducing or eliminating use of benzodiazapene drugs such as Xanax and Valium.

Ashwagandha is traditionally used to improve learning and memory, and is prescribed to everyone from school children to the elderly. In modern research, ashwagandha has been found to boost an important antioxidant in the brain called glutathione. Glutathione is an essential component for cell development, enzymatic activity, and for clearing toxins from the body.

Other studies suggest that ashwagandha may also be an effective treatment for neurodegenerative diseases such as Parkinson’s, Huntington’s, and Alzheimer’s, as it has demonstrated an ability to inhibit amyloid plaques from forming in the brain.

Due to its calming nature, ashwagandha is also recommended for another neurological disorder, restless leg syndrome. 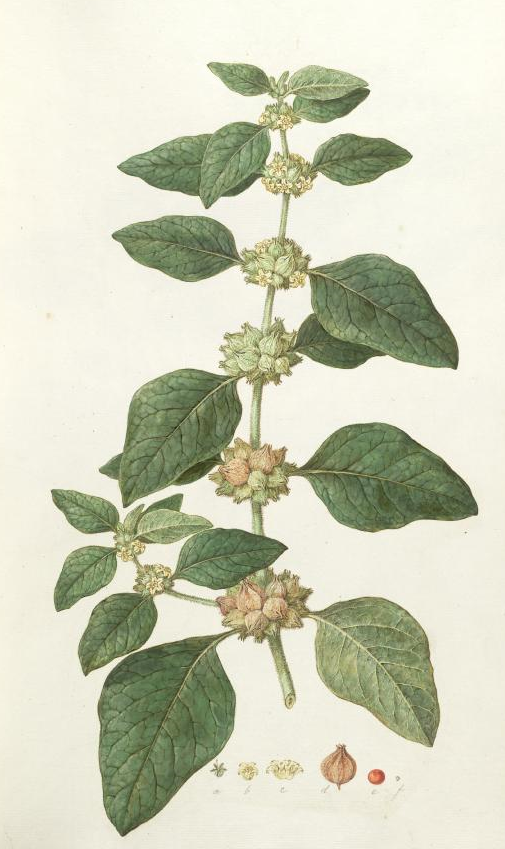 Ashwagandha is a member of the nightshade (Solanaceae) family of plants, a group that includes tomatoes, potatoes, chili peppers, and tobacco. Like other nightshades, ashwagandha is a chemically complex plant full of vitamins, minerals, and alkaloids. Some of the other phytochemicals it contains act as hormonal precursors in the body.

These hormonal precursors make ashwagandha a good remedy for those suffering from an underactive thyroid. In hypothyroid disease, the thyroid gland does not produce enough hormones to meet the body’s needs. Animal studies have shown that taking ashwagandha extract significantly raises levels of a hormone often lacking in hypothyroid disease: T4.

Likewise, people with depleted adrenal glands may also benefit from ashwagandha. Adrenal exhaustion is typically characterized by long periods of high stress. Because ashwagandha helps ease the effects of stress and lowers cortisol, over time it may contribute to bringing the adrenal glands back into balance. For this reason, most modern herbal adrenal formulas will usually include ashwagandha in the mix.

When you strengthen the body, you naturally improve its reproductive ability. One of the best and oldest known uses for ashwagandha is for fertility. For men, it is used to address impotence, premature ejaculation, and to improve sperm quality and quantity.

For women, ashwagandha is used to ease painful menstruation, and combined with another Ayurvedic herb, shatavari, used to stimulate a low libido. Ashwagandha is traditionally prescribed to strengthen the uterus in women who have recurrent miscarriages. However, this herb is discouraged during pregnancy.

Adaptagen herbs are often prescribed to those recovering from long bouts of chronic illness. Like other adaptagens, ashwagandha has been shown to help with cancer treatment and prevention.

Promising pre-clinical research suggests that it may also be a welcome addition to conventional cancer treatment, as it has been shown to increase white blood cell counts, which are often depleted during chemotherapy and radiation. Several studies suggest that ashwagandha actually makes chemo and radiation therapies more effective.

In India, ashwagandha root powder is often steeped in milk and butter, but you might find a capsule or tincture more convenient. In either case, look for a product that contains at least 4 percent withanolides. These are phytochemicals specific to ashwagandha, and are what make it an effective treatment.

If you go for the powder, the dosage is typically about 3 to 6 grams (a half to a full teaspoon), which you can add to a smoothie or hot water. For pills, a general dose is between 500 and 1,000 milligrams, taken two to three times a day. A qualified practitioner will adjust these numbers to determine a dose that is right for you.

Ashwagandha is generally well-tolerated, but those who have allergies to other nightshade plants may want to exercise caution. As with most adaptagens, avoid ashwagandha during an acute infection.